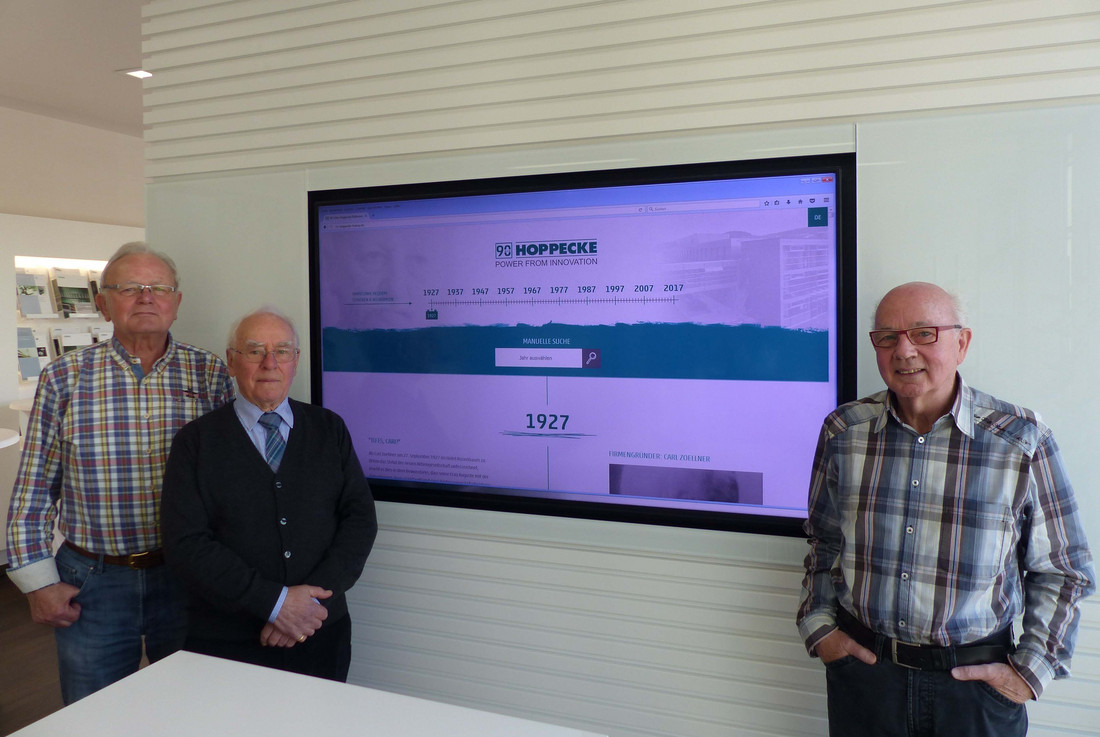 "Do it, Carl." With these words Auguste Zoellner encouraged her husband, a businessman from the Rhineland, to take over a battery factory in Brilon-Hoppecke, which was shut down for a short time. Approximately 250 workers were threatened to lose their jobs in the factory that was founded in 1920. Established as a joint-stock company, the Zoellner family took over all shares in Accumulatorenwerke HOPPECKE in 1936 and now manages the company through Dr. Marc Zoellner in the fourth generation.

In 90 years of HOPPECKE a lot has happened. The company has now compiled stories about people, products and events in an online company chronicle. Some of the former employees helped actively by picking up old photos and telling stories of the past. Thus Wilhelm Schilling, who began in 1956 with HOPPECKE in bookkeeping and initially attended a punched card course at the adult education centre for his work in IT. He appreciated the opportunities offered by the international company and worked for HOPPECKE in Belgium, France and Spain. Born in Hoppecke, he is particularly proud that this company represents the beautiful, small village in the Sauerland region all over the world.
The online chronicle "HOPPECKE History" shows innovations from 90 years, from a special electric fence battery from 1941, to an ice-truck from the 1980s converted into a rolling solar filling station, to a wide variety of car batteries, which for many decades represented an important line of business and, for example, in the early 1960s were the reason for the construction of the plant south of the Hoppecke railway line.
Rudolf Bunse began working for HOPPECKE in 1955. Even today, he still lives within sight of the factory and is still a marginal employee. Among other things, he was head of the department for incoming goods and production manager at the company's own metalworks, and Rudolf Bunse also worked as fire chief at the company's fire brigade and took care of the vehicle fleet. In the online chronicle "HOPPECKE History" you can find some interviews with Rudolf Bunse, for example, he tells of an adventurous business trip to Saxony shortly after German reunification, HOPPECKE took over the Zwickau Battery Factory in 1992. He wishes his employer "that the family-like atmosphere will remain like this. I have always felt very comfortable at HOPPECKE and I am still connected to the company and the Zoellner family."
Many employees remain connected to HOPPECKE even after their professional life. Since 1981, HOPPECKE has had its own pensioners' association, which organises an annual excursion and a Christmas party, for example. The current chairman is Rainer Dünschede, who was personally recruited in 1968 by Claus Zoellner, then head of HOPPECKE, on a Saturday afternoon. Dünschede had worked in Cologne for several years and wanted to return home. He simply called HOPPECKE to find out more. This story is also available in the "HOPPECKE History". Rainer Dünschede wishes HOPPECKE "that it will continue to be a large family and that all employees will enjoy their work.
(Foto f.l.t.r. Rudolf Bunse, Wilhelm Schilling, Rainer Dünschede)
hoppecke-history.de