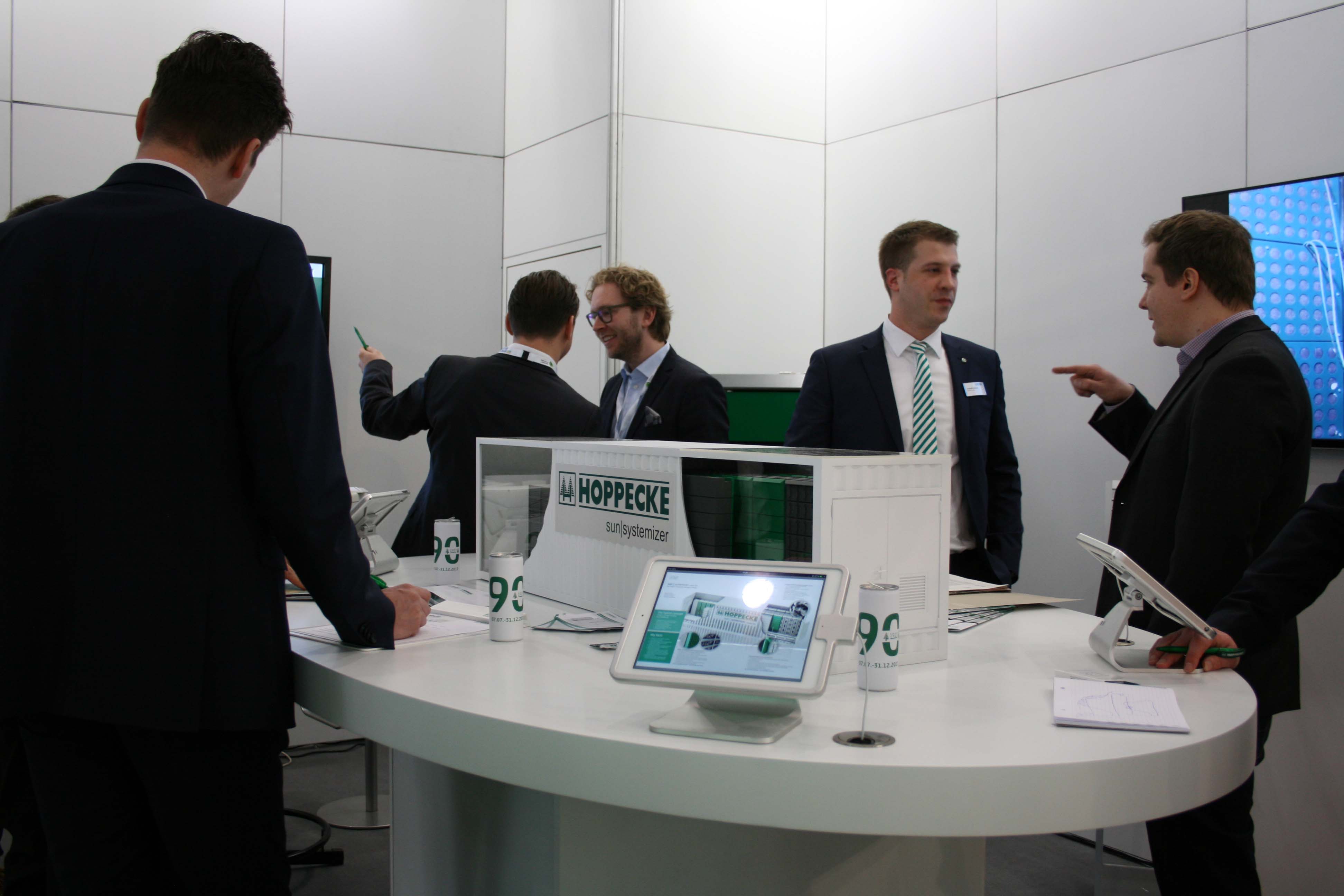 HOPPECKE presented itself at two internationally important trade fairs this week. Two focal points of the German-based supplier of energy storage systems are the drive of industrial vehicles and the storage of energy in large quantities. LogiMAT in Stuttgart is Europe's largest annual trade fair for intralogistics. This year it has set several records: The number of visitors has grown by around 50 percent over the past three years (2018: 55,300; 2015: 35,105). The number of exhibitors this year was higher than ever (2018: 1564; 2015: 1152). And the number of innovations presented there is also impressive, 122 world premieres were announced in the run-up to the fair alone.

The industry is currently particularly concerned with the possibilities of digitized control of workflows and transports in warehouses. Here HOPPECKE product manager Dr.-Ing Manuel Strugholtz explained the possibilities of the "networked traction battery". All batteries and charging stations in a fleet can be networked, evaluated and controlled. This optimizes usage and loading times, which reduces costs and increases the service life of components. HOPPECKE has been participating in LogiMAT since 2010 and this year presented itself on a 60 square meter stand, which offered enough space for personal discussions with visitors from all over the world. For more and more companies, the switch from internal combustion engines to electric drives is also a topical issue. The next major trade fair at which HOPPECKE will present its intelligent solutions for the drive of industrial vehicles is already imminent: CeMAT, which will be held parallel to the Hanover Messe at the end of April (23-27 April), will be entitled "Industry 4.0 meets Logistics 4.0".

Another large field of activity of HOPPECKE is the stationary storage of energy. The core product of the company is a freely scalable and modular energy storage system, which is currently being built up to a storage capacity of 100 MWh. For comparison: An average household in Germany consumes around 3 MWh per year (according to the Federal Association of Energy and Water Management). At the Energy Storage Europe trade fair in Düsseldorf, at which HOPPECKE participated for the fourth time this year, the interest of international visitors in the scalecube large storage system was very high. The system is interesting for the storage of wind power and solar energy, both for electricity providers and for residential districts that want to supply themselves independently. Industrial companies can buffer short peak loads via such a storage. Charging stations for electric vehicles can also be supplied with environmentally friendly energy using such a storage device. According to a current estimate by the German Energy Storage Association (Bundesverband Energiespeicher e.V.), the energy storage sector will grow by around 11 percent in 2018 and achieve a turnover of 5.1 billion euros. The main drivers are medium-sized companies. HOPPECKE is already preparing for its next major trade fair appearance in this area. One of the world's largest trade fairs for solar technology and energy storage will be held in Munich at the end of June (Intersolar and ees Europe, 20-22 June). Here, the Brilon-based company, which operates in 21 international subsidiaries, expects particular interest in its storage solutions for environmentally friendly energy and power supply in regions without electricity grid connection.