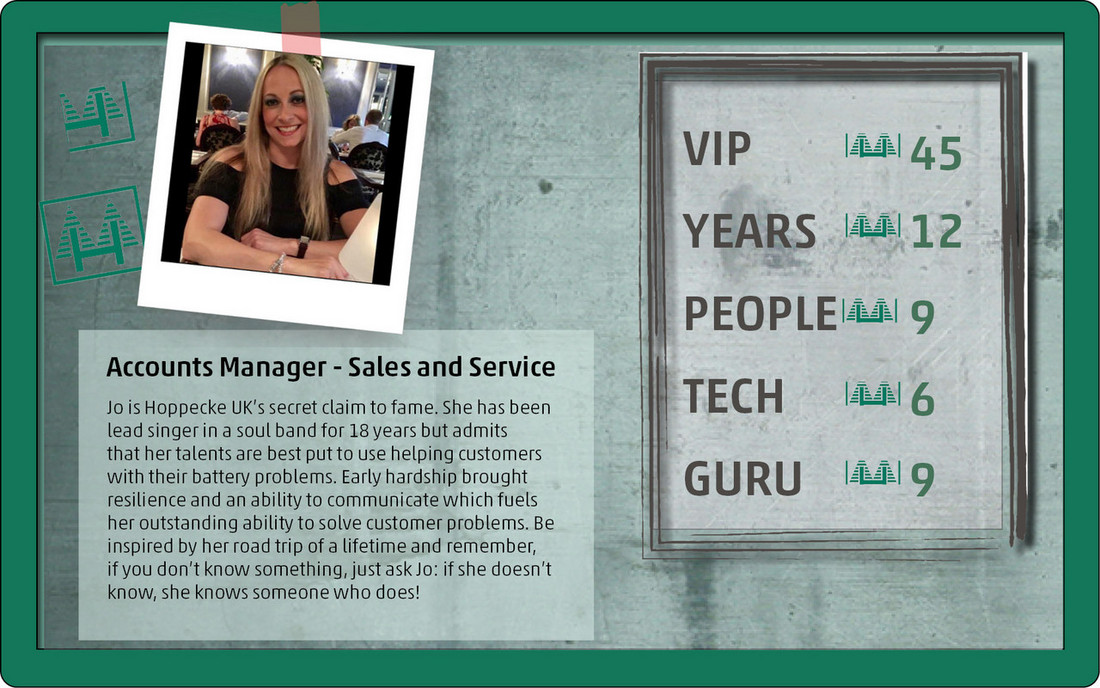 How long have you worked at Hoppecke?

I’ve been with Hoppecke for seven years now. After being made redundant from my commercial lending job at the Britannia Building Society/COOP in Leek, I came across the Hoppecke role. It stood out to me because it seemed to draw on similar skills that I had already developed such as communication, building rapport, handling fairly technical enquiries and developing a relationship with customers based on trust. The recruitment agency seemed to think these were transferable to industrial batteries, though they did say “they are not the sort (of batteries) that you put into a torch!”.

Interestingly, I wasn’t interviewed, instead they put me into Natalie’s support team for a day and I had an interview about that experience. I was delighted to be taken on and have never looked back. This is a fabulous company to work for – I have had opportunities for progression and exposure to many things that have stretched me and helped me to grow. Before I got pregnant I was an account manager travelling all over the country. Now I am part of a team looking after one of our major accounts, Briggs Equipment. I am actually based in their offices in Cannock for a lot of my time, although the coronavirus crisis has changed that for a little while.

What attracted you to this industry?

Starting from the grass roots and working my way up is important for me. I was curious as to what industrial batteries were and how they helped keep business running. What is involved and what does it mean? I have always been like that. It seems to be an industry that changes a lot, the technologies change and you can learn constantly.

How did your upbringing influence your life choices?

When I was 10 my mum died. Everything changed; when that happens, you have to grow up quicker. I think it made me very organised and I had to take on responsibility early. I think that this happening in my life has made me who I am.

If you had the chance to go on the road trip of a lifetime, and could only bring four people with you (living/dead, real/fictional), who would they be and where would you be going?

I have thought about this and know exactly who I would want along with me! Firstly, we would be on a road trip across America, heading to New York. I would have Madonna with me. I came across her first album when I was six years old and I’ve been a fan ever since. For me, she comes across as someone who knows who she is and what she wants. She has shown great dedication to her success over the years and also has the ability to reinvent herself time after time. I really admire her.

Then I would choose Robert DeNiro. My ultimate favourite film is ‘Casino’ and he is from that generation of actors in Hollywood who have a certain class about them. Plus, I think he is massively handsome! There is always something that drew me towards him, and my son was born on his birthday. I would enjoy talking to him about his movie roles and other actors that he has met.

I would also invite Elvis Presley. I like blues and gospel music and love what he did with his music. I just wish he had been given more freedom to follow his real creative passions. My dad liked him and would play his music at home when I was growing up. He’s seen as cheesy now but the stuff he was genuinely passionate about stands the test of time.

David Attenborough would complete the trip. He has done so much travelling and seen different sites around the planet. With his vast experience he would have many answers to all my questions!

What single quality do you think has contributed to your success?

I think that would have to be my communication skills. I have been told by different people that it is a strength. I seem to be able to communicate at all levels. I think it helps that I love learning about people and enjoy meeting folks from all walks of life.

What secret ambitions/talents do you have?

I am a singer and have been part of  a ten-piece soul band for 18 years, travelling the country to perform with them. I took a step down when I had Luciano, my boy, but I still perform in an acoustic duo with my partner. I do a bit of vocal coaching in my spare time, too.

What keeps you getting up and doing this every morning?

My three-year-old, Luci. He literally gets me up at 6am every day.

What do you do to relax or have fun?

Dance and exercise really. I like working out with loud music and good instructors who put me through my paces! I also spend a lot of time outdoors with my family and our dog.

What advice do you have for others, maybe younger people, in this industry?

If you don’t know, just ask! There is always somebody else who will know. And if they don’t know, they might know someone who can help. You will be surprised at how quickly you will pick things up. When I first came into this job I knew nothing. In this type of work, you have to get it right. And you can prevent a mistake by asking questions.